Last week I discussed options (see Note 1 below for a link) based on whether the market declined last week and the length of your investment horizon. The market did not decline and I list the relevant options and have added notes in italics:

As of this writing, it appears that we will make it through the current period of vulnerability this week and next without declines of more than roughly 15%.  Over the coming week(s), I will review the strength of the growing resilience and may further decrease Box #2 Cash, and, if it makes sense, for those with a short horizon (e.g. less than 7 years) to move into more aggressive model portfolios. We may be entering a period of high resilience lasting several quarters, and many subscribers may want to move to more aggressive portfolios to take advantage of this.
Please contact me with any questions about these options.
This post covers:
Outlook Implied by Current MRI Conditions

These views do not affect the target weights of the model portfolio, but they are consistent with a broad range of MRI conditions and economic variables I review each week. When the MRI conditions change, the outlook will change.
With multiple promising vaccines, investors can begin to focus on economic recovery in greater detail. Prior to the success of a few vaccine trials, the timing of the end of the pandemic and its related economic effects was uncertain. Now, there is increasing clarity. As you may recall from prior notes, in normal times, stock market investors try to anticipate the economic conditions that will exist 6 to 9 months in the future. Near term expected conditions have less importance. This means that the expected near-term difficulty of the pandemic and any lockdowns will have less of an impact on their decisions.

In addition to now having multiple promising vaccines, other factors contribute to optimism for economic growth in 2021. These include government economic stimulus efforts around the world, the US Fed’s promise of low interest rates for the foreseeable future, and pent-up consumer demand from months of reduced spending.
Last week I mentioned that high current stock valuations are a concern. High current valuations could limit additional price gains. However, I believe the price of the DJIA will be supported over the next several weeks by the following factors: I expect there to be ups and downs around the time the US Congress debates and votes on the next stimulus bill. Barring a complete failure to pass a bill, I expect the market to move higher through this period.

NASDAQ versus the DJIA

The tech-heavy NASDAQ index has returned about 45% over the last 52 weeks. The S&P500 has about 17%. The DJIA has returned just under 8% over the same time period. The pattern, especially between the NASDAQ and the DJIA fit a “K-shaped” market recovery, which I described briefly in (link: https://marketresilience.blogspot.com/2020/08/performance-review-nasdaq-valuation.html). 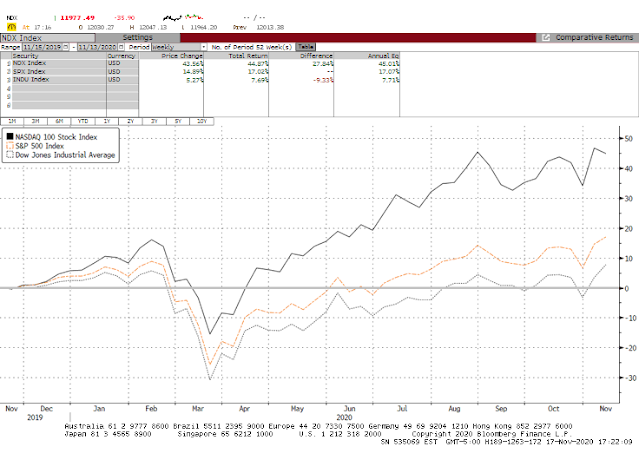 The MRI statistics of the NASDAQ and DJIA index suggest that the DJIA may move higher to close the performance gap. I have already described the growing resilience of the DJIA. It is primed to move higher. The NASDAQ has quite different readings:

Based on these MRI and other considerations, over the next several weeks, I believe that the most likely movement is for the NASDAQ to decline and the DJIA to move higher.
Valuation and Political Concerns

I do have concerns about the valuation of the stock market, which I mentioned last week (see Note 1, below). I wonder if investors in general believed over the past 9 months that as long as there was no vaccine, it was more likely that government stimulus would continue to expand. Now, with at least two promising vaccines, investors may be less interested in the work-from-home investment theme that has favored the NASDAQ index, and may therefore start paying more attention to valuation and growth. If this concern is justified, in early 2021 we may see more volatility in the markets as actual company earnings growth is compared with the expectation of high growth post-pandemic. However, based on historical precedents, as long as interest rates stay low the time that investors in general focus on valuation is likely a few months away.
We also have upcoming political issues and transitions.  Passage of an additional stimulus bill is important to the stronger economic growth expected in 2021.  Should this be derailed or there are unexpected difficulties in the transition to the new US administration, growth may be slowed and be a downward force of stock prices.

Options for Near Term

Over the last few weeks, I have described a few options for switching to a different model portfolio. I’d like to expand that description to form a few different scenarios for you to think about before the next Plant season. Thus, the options are as follows (rev highlighted):

Regarding the Micro MRI, it continues to trend lower and was at the 20th percentile of levels since 1918. It trended lower last week even though DJIA prices moved higher. The current level, like that of the Macro MRI, is at the lower end of its normal range, which suggests that a shift to the upleg of the cycle may occur in the next few weeks. Thus, the portfolios are likely to have increased exposure to the DJIA over the coming weeks.

The tables below present performance figures for the most popular Focused 15 Investing model portfolios. Most of the other portfolios shown on the publications are more aggressive or more conservative versions of these.

2020 Has Been a Challenging Year

This has been a challenging year for the model portfolios in terms of performance.

Of the five most popular model portfolios, only one (sg218) has performed better than the DJIA. The others had returns ranging from a loss of 10% to a 0% return. 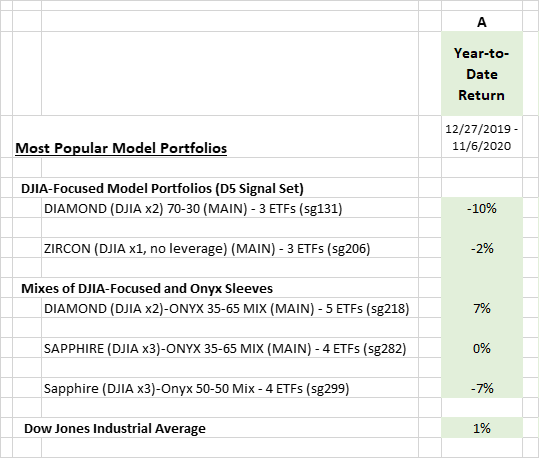 The main cause of the low returns is that our portfolios became very conservative (high target weights in cash) in June and have missed the positive returns since then. The target weights followed the MRI cycles as intended, but market returns were heavily influenced by, I believe, low interest rates and massive economic stimulus from governments around the world. Their measures more than compensated for the lack of resilience in the market. The Focused 15 Investing approach explicitly avoids making bets on news-of-the-day events, which, in most environments, enhances returns. But in 2020 this has not been the case. I believe 2020 will be an unusual year and that no change in the approach should be made.

The Onyx Sleeve Has Performed Well

I designed the Onyx sleeve in 2013 to provide reliable returns in lower interest rate environments. Its goal is to provide consistent returns when bond returns are low. As you may recall, Onyx consists of four low volatility ETFs:
The MRI-based signals rotate target weights among these four ETFs favoring the more resilience and avoiding the more vulnerable. The recent 2-year period has been a useful test for the Onyx sleeve. While the DJIA-focused sleeve has history beginning in 1918, the Onyx sleeve’s history begins in 1991, which is quite a bit shorter. Over the last 2 years, we have had a major crisis (the pandemic) and periods of concerns about rising and declining interest rates. The Onyx sleeve has performed well during these periods, and I am confident that it can provide positive returns in a wide variety of market environments. It is important to note that Onyx has lower long-term returns than the DJIA-focused sleeves but is a good complement to the DJIA-focused sleeves. Thus, I provide Onyx mixes in all weekly publications. 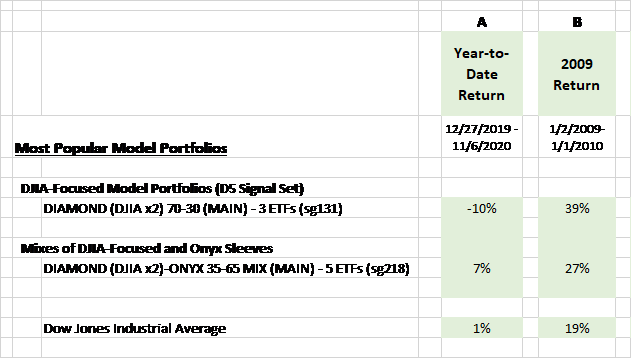 While the Diamond-Onyx Mix (sg218) has had better performance in 2020, Diamond (sg131) has better performance over a much longer period. The table below includes the 20-year performance figures for a set of popular model portfolios. The figure in columns C, D, and E are annualized. 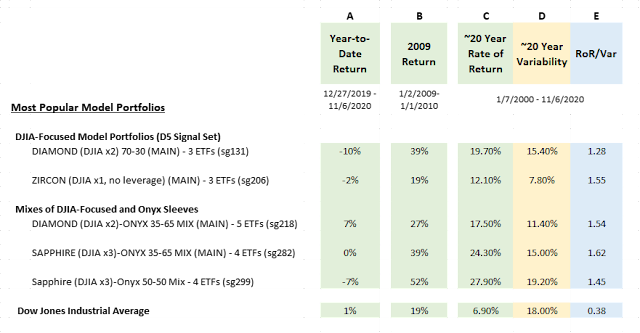 One can see that even though Diamond (sg131) has had poor performance in 2020 (year-to-date), it still has better long-term returns than Diamond-Onyx Mix (sg218).

Stock valuations are high compared to the historical range of the last 20 years. Common valuation measures are listed below — the higher the valuation, the more expensive the stocks. In general, one wants to buy stocks when valuations are low and sell them when valuations are high.
The following data is from Bloomberg. It shows these valuation measures for the DJIA are at high levels compared to those of the last 20+ years. The top panel shows the price history for the DJIA (total return on a log scale), and the time period covered is 1997 through early November 2020.

Over the last 20 years, there were two major declines prior to 2020: 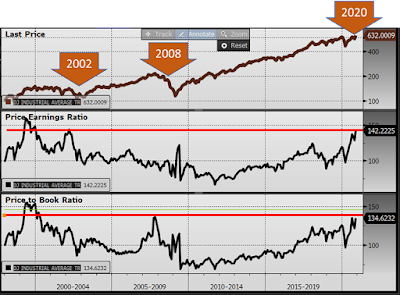 However, at far left of the chart the valuation, note that levels are higher than the current levels indicated by the red lines. This was the end of the Internet Boom of the late 1990s. Even though the Internet Boom primarily affected the NASDAQ index, the valuation measures of the DJIA also showed high valuation statistics as well. This early period may be a useful comparison for the current period. The shutdown measures to contain the virus have boosted the prices and valuations of Amazon, Apple, Netflix, etc., and the DJIA stocks may be affected as well.

As mentioned in prior notes, there are factors that may make long-term historical valuation analyses less relevant in the current situation. One factor is the Fed’s pledge to keep interest rates very low for a long period of time and to buy assets on the open markets to reduce fears about market declines. Also, governments around the world have spent billions to compensate for reduced employment and business activity. The personal savings rate in the US has moved sharply higher in the pandemic (link: https://www.statista.com/statistics/246268/personal-savings-rate-in-the-united-states-by-month/). As soon as the risk of Covid-19 reduces because of an effective treatment and/or vaccine, spending may be unusually high as people make purchases that have been delayed during the pandemic.

Thus, the current valuation of the DJIA stocks may not be excessive considering future growth related to the massive government stimulus and low interest rates.

Nonetheless, the issue of high valuations remains a concern because a sharp rebound of economic activity could reduce the will of the Fed and Congress to provide support. They may be less willing to extend their extraordinary support for the economy, which would remove key supports for maintaining stock prices at high valuation levels.