Last week’s post discussed the current valuation of the DJIA compared to valuations over the last 20+ years (https://marketresilience.blogspot.com/2021/07/weekly-note-july-28-2021-perspective-on.html).

This week’s post discusses alternative interpretation [or interpretations] of today’s high PE valuation. It also points out how our focus on resilience cycles reduces the importance of which view of valuations proves to be most accurate.

I mentioned last week that valuation ratios have declined since March of 2021, and this might give some investors hope for higher stock prices. The graph below shows the PE ratio for the DJIA in yellow (calculated by Bloomberg using recent 12 months earnings). Price is shown by the black line on a log scale. In general, we want to buy assets – in this case earnings – when price is low and sell when high. Note that the PE ratio has declined since the beginning of April 2021. As the DJIA PE ratio descends from its high level, prices can move higher, all else equal, to approach a PE valuation level that the market has already tolerated. 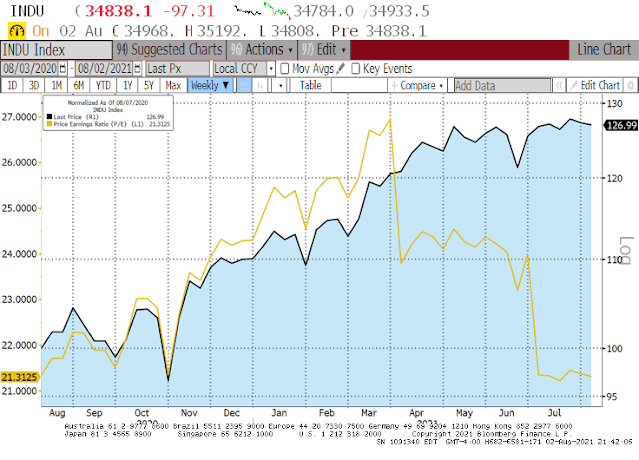 We are in a period of low interest rates and there is a reasonable expectation for high corporate earnings growth because of massive economic stimulus. These factors allow PE ratio levels to be higher than they otherwise would be. At the moment, investors globally are voting with their dollars and saying that current PE ratios are not a concern and stock prices can continue to move higher as corporate earnings increase. This is an optimistic case for stock prices.

An Alternative View of the Same Chart

A contrary view is that the market – reflecting the collective wisdom of investors globally – believes that earnings will not continue to grow in the future at the same high rate that they have in the recent past – that we are now seeing peak earnings. Therefore, stocks do not justify as high a PE Ratio even though interest rates are still at an extremely low level. Prices may decline as earnings fail to grow as expected and move the PE ratio to a more normal level compared to the last 20+ years. This is a pessimistic case for stock prices.

A Regular Pattern of Cycles

The cycles between collective optimism and pessimism are regular. The cycles, especially the shortest cycle we discuss, the Micro MRI, are regular like the tides. When the tide comes in it will lift all boats. When it goes out, all boats will drop. With tides, we know pretty accurately when the next tide will be and how high or low it will be. A severe storm can flood coastal areas and push tides higher or lower, but the tidal forces occur at regular intervals. Humans observed these patterns long before they knew what caused the tides.

The Micro and Macro MRI are both in the uplegs of their cycles as of when the Micro switched to its upleg at the end of July. The Macro has been in the upleg of its cycle since early December 2020. At the moment, tidal forces are lifting all boats. Thus, the optimistic view of stock valuations is currently prevailing.

Based on historical norms, the optimistic view should last into September. I project upleg of the short-term cycle (Micro MRI) to end in September. At that time, a more pessimistic view will likely prevail and perhaps high valuations will be the focus of that pessimism. I review what the MRI are saying about the tug-of-war between the optimists and the pessimists, approaching storms, and if the upleg of the Micro MRI cycle might occur earlier or later than expected. At this time, September appears to the next period of reduced resilience (and heightened vulnerability) for stock prices.

Our current situation reminds me of a common investment industry adage, “a bull market climbs a wall of worry.” This means that during a bull market, the path to higher stock prices is a slow climb up and is never free from worry about company growth, stock valuations, the US dollar, trade wars, Washington, etc. If one were to wait until the market is worry-free, one would miss an entire bull market. This may describe the current environment.

Some in the industry add on, “A bear market jumps out the window.” This means that once a bear market begins, the market moves down quickly and without regard for the specifics of the situation. Historical data validate this; bull markets tend to last much longer than bear markets.

I will add, “the cycles of resilience tell you when the bull and bear will start and end their journeys.” Timing is everything. At the moment, we do not have the conditions typical of when the bears jump.

This is way of saying that while I am concerned about high valuations, perhaps my concerns are simply part of the wall of worry. The best way to know where the market is going near term is to track the tug-of-war using the MRI. At the moment, it appears that the optimists will prevail into September.

The broader market dynamics suggest that the next decline will not be a sharp decline for stocks like March 2020, 2008, or 1987. Instead, they suggest a long decline like the that occurred from the beginning of 2000 to the end of 2002. This coincided with the deflating of the Dotcom bubble of the late 1990s, which also was a period of high valuations.

An expected part of managing money – either for institutions, other individuals, oneself – is that one must contend with all the usual fear and greed, plus climbing bulls and jumping bears, and tides and storms. Making investment decisions is challenging at most times. But if one has a disciplined investment approach based on measurable and meaningful dynamics in the markets, one can do well longer term. I believe we have this in the MRI-based investment approach. Through the challenges, adhering to process and discipline will help us deliver attractive returns.

We don’t buy low and sell high on prices or valuations measures. Valuation measures are driven by stock prices, which are greatly influenced by the news of the day. Valuation ratios are also difficult interpret. We take what I believe is a more reliable path; we buy low and sell high on the naturally occurring cycles of resilience tracked by the MRI.