A Historical Perspective on Past Inflationary Periods

A major concern for investors is inflation and the Federal Reserve’s efforts to curtail it. Inflation can harm investors because it erodes the value of their assets. The charts below show that initial periods of high inflation are associated with weak stock market returns. However, if inflation persists for several years (as it did in the late 1960s and 1970s), investing in the stock market can help make up for the losses in wealth caused by high inflation. The charts also show that the cycles of resilience measured by the MRI are relevant to both inflationary and non-inflationary periods. The final figure shows the high return of commodities during inflationary times, which justifies the inclusion of a commodities ETF in our portfolios.

Figure 1 below shows the price of the DJIA (log scale) on the upper panel and the Consumer Price Index, or CPI (log scale), on the lower panel. The figure covers from January 1965 through August 12, 2022. Period “1” shows the current period of rapidly increasing CPI. It is this recent period of inflation that the Fed is trying to curtail. As has been reported in the news, the current increase in the CPI is much higher than its increase over the prior few decades. We need to look back to the 1970s before find the CPI moving up as quickly. In period “2,” which spans 1965 through 1982, you can see that the CPI increased steeply for almost two decades. 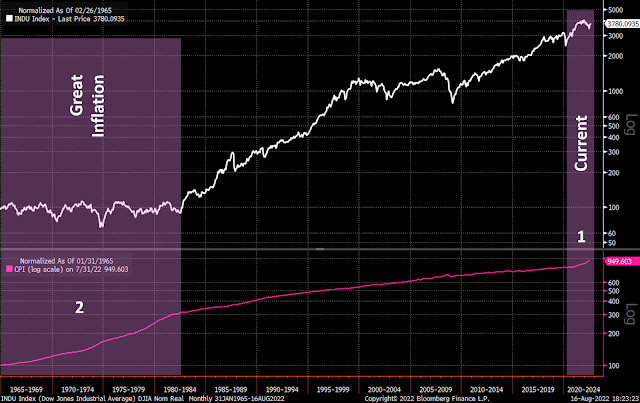 Figure 1 shows that, in period 2, the CPI increased steeply. During period 2, inflation reduced the purchasing power of the dollar by over 65%. This means that if you simply held cash in your account during period 2, the value of your money would have dropped by that much.

The Fed calls this period the Great Inflation. In their description of this period, they state:

While economists debate the relative importance of the factors that motivated and perpetuated inflation for more than a decade, there is little debate about its source. The origins of the Great Inflation were policies that allowed for an excessive growth in the supply of money—Federal Reserve policies.

We can see in the upper panel of Figure 1 above that the DJIA stock index had major price declines (in 1970 and 1974) but ended period 2 close to the level it at the beginning in nominal terms (the numerical price of the index).

Figure 2 below shows the change in price of the DJIA in constant dollars (white dashed line). 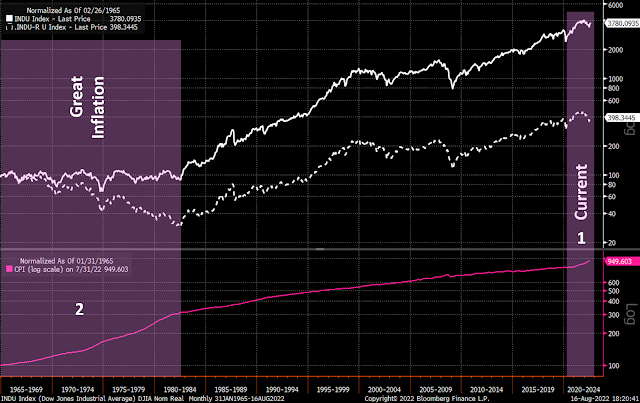 We can see that the DJIA in constant dollars dropped by over 50% during period 2 because of a loss of purchasing power resulting from inflation. The loss is significant.

The Great Inflation is not the only period of inflation over the last roughly 100 years. Figure 3 below shows the several other periods of high inflation since 1912. 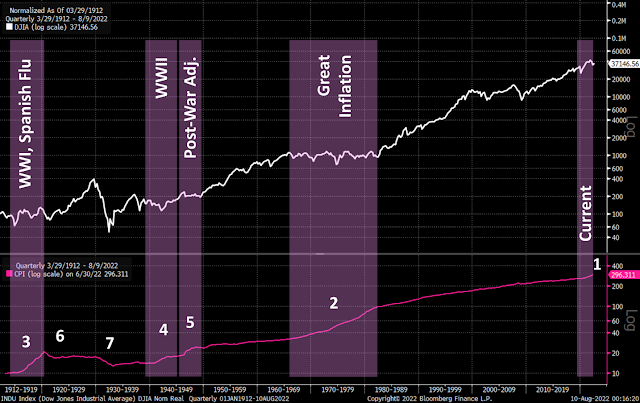 Period 3, from roughly July 1914 through November 1919, included WW1 and the global Spanish Flu pandemic, both of which affected economic activity. The CPI moved sharply higher during this period. The DJIA moved up and down and ended the period close to where it started.

Period 4 covers the years of WW2, from September 1939 through September 1945. The CPI moved higher more gradually than in period 3. During this period the DJIA moved lower at first but then ended the period slightly higher than when it started.

Period 5 is the Post-War adjustment period. The US economy needed to be retooled for domestic consumption instead of war. This period had a sharp spike in inflation when demand for consumer goods outstripped supply. The DJIA ended this period slightly lower than when it started.

There are also periods of “deflation,” indicated by periods 6 and 7. Period 6 reflects the beginning of the Roaring 20s and a downward adjustment of prices after the spike in prices during period 3.

Period 7 is the deflation of the 1930s. Deflation is feared by economists and central bankers because consumers will delay spending in anticipation of lower prices in the future. When they delay spending, the economy weakens leading to further price decreases. Deflation can thus become self-perpetuating. Many believe deflation contributed to the economic stagnation of the 1930s.

Deflation has been a concern more recently for central bankers around the world. From roughly 2009 through 2019 they took active steps to prevent the onset of deflation, which might have resulted from the Global Financial Crisis of 2007-2009. They used extraordinarily low interest rates and other mechanisms to inflate the economy and push inflation upward to their target of 2% a year. 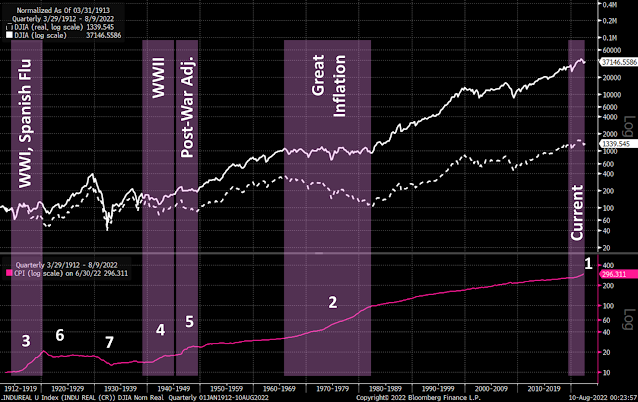 One can also see in Figure 4 above that the periods of extended gains in the stock market occurred outside of the inflationary periods.

Figure 5 below shows the performance of the loss-avoiding signals we use for the model portfolios. (Data needed for these signals is available for the last century.) Trading between the DJIA and cash depending on the MRI performs better than simply holding the DJIA. It also shows that trading based on the MRI is useful in both inflationary and non-inflationary periods. 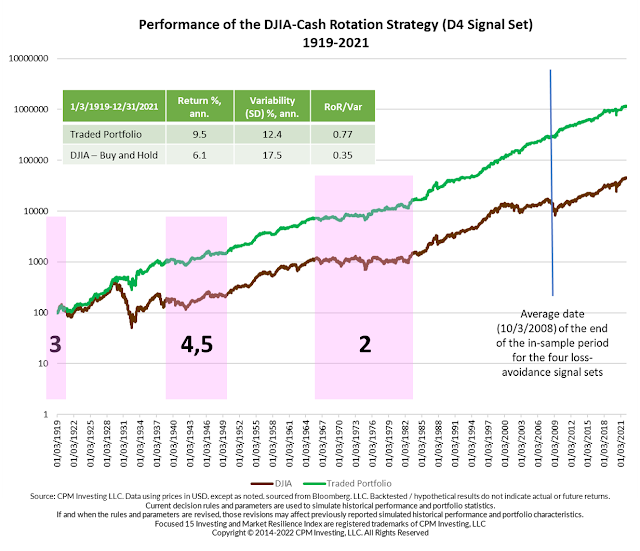 The traded portfolio (i.e., using the loss-avoiding signals) moved higher in period 1, 4, and 5. This reinforces that value of the MRI during times of inflation. Bonds are not included in the portfolio because bond index data is not available for the early part of this period. The MRI begin in 1919 so we cannot see all of period 3 (1914 to 1920).

Commodities tend to perform well during times of inflation. The commodities indexes begin in 1974. Figure 6 below adds the S&P Goldman Sachs Commodities Index (yellow) to the earlier charts. It makes sense to add an ETF for commodities to our portfolios during inflationary periods. 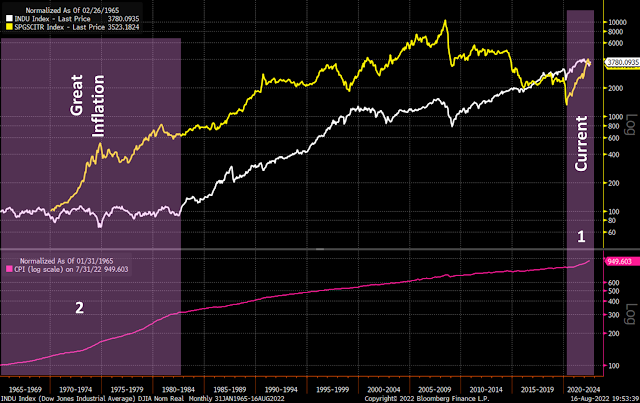 The commodity index had high returns during the Great Inflation. It has, however, declined since its all-time peak in 2008 during the time that central bankers were concerned about deflation.

We can draw these conclusions from this brief review of prior inflationary periods: