The shortest cycle of resilience (the Micro MRI) continues to be in the up-leg of its cycle. Last Friday, it was at the 90th percentile of all levels since 1918. The prior Friday it was at the 85th percentile. With strong price moves yesterday (Tuesday the 26th) and today, this week may mark another move higher. Over the last one hundred years, there have not been prominent cases in which the Micro MRI simply continued going higher for several weeks after being at this high level. Instead, the Micro MRI moves to the down-leg of its cycle and prices tend to follow it lower.

In the main relief rally during the 2007-2009 Global Financial Crisis, the Micro MRI peaked around the level of the 85th percentile. This is good reference point, but is not a hard and fast rule for the current time.

We can think of the current high level of the Micro MRI as meaning the stock market moving into peak short-term optimism: good news is recognized by the market and bad news is not. This sentiment is likely to change soon and will be associated with increased pessimism and a lack of support for higher prices, all else equal.

These resilience conditions are not isolated to the DJIA. Stock markets around the world are also at the upper ranges of their Micro MRI cycles. You may recall from my discussions of the Focused 15 Investing approach that geographic diversification tends not to be useful in a global crisis. These other stock market indexes around the globe have Micro MRI levels very close to those of the DJIA, and my comments above apply to them as well.

The following markets are also moving toward the peaks of their Micro MRIs, but have levels that are not as high as those listed above.

None of these eight major stock indexes has sources of resilience right now other than the Micro MRI. Neither the Macro MRI nor the Exceptional Macro MRI is providing resilience, making all these indexes precarious in terms of holding on to stock market gains.

Historically, the DJIA has dominated the price trends and conditions of other markets. This means that the MRI-based signals for the DJIA tend to explain the price movements of other stock markets. Yet the MRI signals of other markets tend to have little explanatory power for the price movements of the DJIA. This has been especially true in global crises when all stock markets become highly correlated. Thus, the resilience conditions of the DJIA are more important than those of the others. In today’s environment, the greater upside for the NASDAQ (as indicated by its Micro MRI being at only the 45% percentile) and its recent price strength may be the best case supporting continued stock market moves higher. But historically, the condition of the DJIA seems to overpower the other markets. The algorithms reflect this dominance of the DJIA.

A few weeks ago, I gave guidance to raise cash. This was the first time I have taken this step since the beginning of Focused 15 Investing. It had the effect of bringing forward in time by about one week the more defensive positions that the algorithms were moving toward. The algorithms are intended to identify the peak and troughs of the MRI cycles. In the case of relief rallies (like the current one), prices move higher based on just one MRI – the Micro MRI. When that one MRI ceases moving higher, prices can drop quickly, all else equal. In addition, we trade on Fridays, and prices, of course, do not always peak on a Friday. Given the large potential losses and the small potential for gains as the Micro MRI moves toward its peak in a relief rally, raising cash has been prudent, even though it may not have added return over this period. Going forward, I plan to do the same in similar resilience conditions.

This week, the algorithms caught up with the more defensive stance of last week. In other words, the allocations to DJIA-linked ETFs have been reduced. Thus, we can reduce our cash levels in Box #2 of the Shares-to-Trade Worksheet to the normal 3%. The net effect will be only a small adjustment to the weights of the ETFs in your account.

If the Defensive Positioning of Our Model Portfolios is Wrong

In the event that our algorithms become out of sync with the market, they will recalibrate. As mentioned, the Micro MRI is still in its up-leg. If stock prices continue to move higher once the Micro MRI moves to the down-leg of its cycle, our framework would describe the market as being driven by news-of-the-day events, which would include optimism about the economic reopening and the massive economic stimulus.

These news-of-the-day effects would be compensating for the market’s lack of inherent resilience. Should these effects more than compensate for upcoming period of "least resilience," the algorithms will recalibrate. This recalibration would take place in a few weeks (as opposed to months) and would likely result in the Macro MRI and Exceptional Macro MRI beginning the up-legs of their cycles and providing resilience. These, in turn, would cause a change in our target weights.

Below, I update the charts I introduced in last week’s note. I have added a fourth pattern depicting the market moving higher when market resilience is at its lowest. In addition, I am listing these patterns in order of my subjective view of their probability (highest to lowest) based on historical norms – not any assessment of the current stimulus or reopening plans. Keep in mind that as of this week the Micro MRI is still moving higher and has not peaked. The period described below relates to the period after the peak of the Micro MRI. 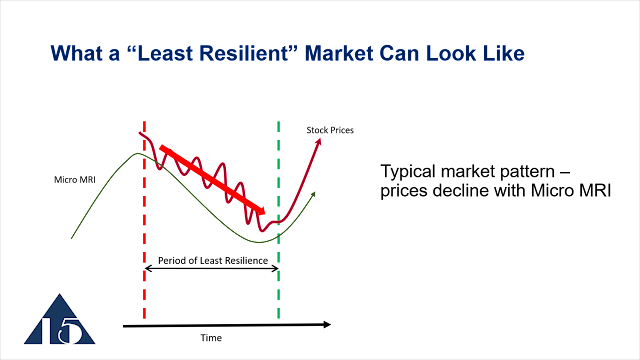 In the delayed-decline pattern, rather than a consistent decline over the period, the major decline occurs at the end. A good strategy for this pattern is to be out of the market prior to the decline. The peak of the Micro MRI at the beginning of the period is the clearest and most reliable signal to get out of the market. While doing so at that time seems premature, it is the most effective strategy for this pattern. One should be patient with the defensive position while the market moves up and down without a large gain or loss prior to the larger decline at the end of the period. 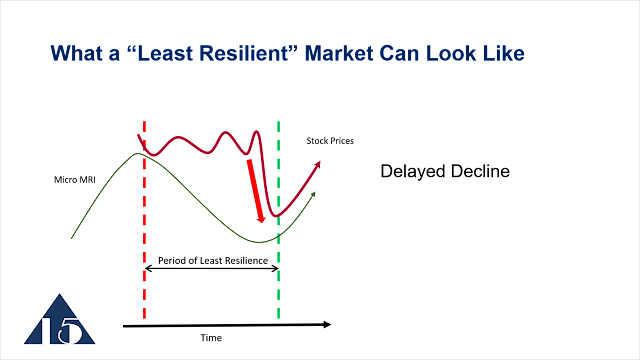 The flat pattern typically occurs when there is an abundance of good news in the marketplace and stock prices remain at roughly the same level over the four to twelve weeks of this phase of the cycle. Prices move higher temporarily on any good news, but the market does not hold on to those gains. In this pattern, staying in the market or moving out does not have a big impact on returns over the period. 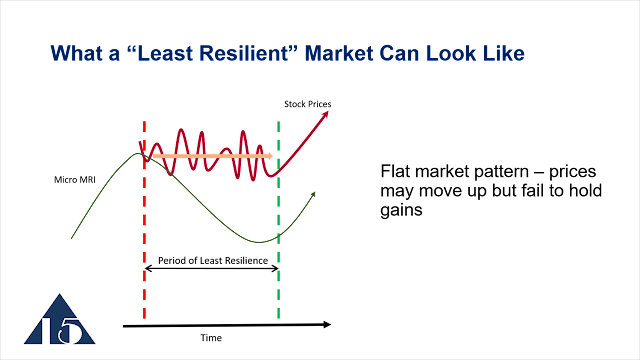 In the prices-move-higher pattern, good news overwhelms the lack of resilience in the market. Prices move higher because of that good news. In the current environment, the massive economic stimulus by central banks around the world could provide the overwhelming good news. However, our bets are based on resilience, not an assessment of the magnitude of good or bad news. We will miss the gains of this period. The algorithms treat this pattern like it is the “delayed decline” pattern to avoid the decline at the end of the period. If prices do move higher, the pace is not likely to be as steep as when the Micro MRI is ascending. If this pattern takes place, the algorithms will respond quickly (in a few weeks) to it and move assets into the stock market as Exceptional Macro MRI starts to emerge. (See discussion above about how the algorithms respond when news of the day overwhelms vulnerability conditions.) I can usually see Exceptional Macro MRI starting to emerge and may be able to alert subscribers to this situation. 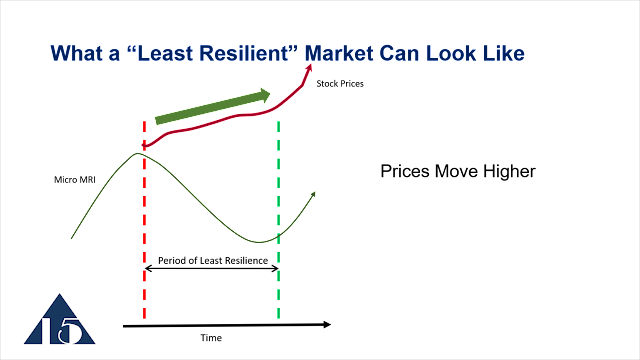 The DJIA is close to the peak of its Micro MRI. As of last Friday, it was at the 85th percentile of all levels since 1918. After it peaks and ceases to provide resilience, the DJIA will be “least resilient,” meaning that none of the MRI (Micro, Macro, Exceptional Macro) are in the uplegs of their cycles. For the subsequent roughly 4 to 12 weeks, the market will be very vulnerable to declines. In the absence of very good news, prices are likely to decline.

I’d like to show you a few alternative patterns for what the market may do during this period of least resilience.

The image below shows a typical decline (a). Soon after the Micro MRI peaks and marks the beginning of the period of least resilience, the DJIA starts to decline. 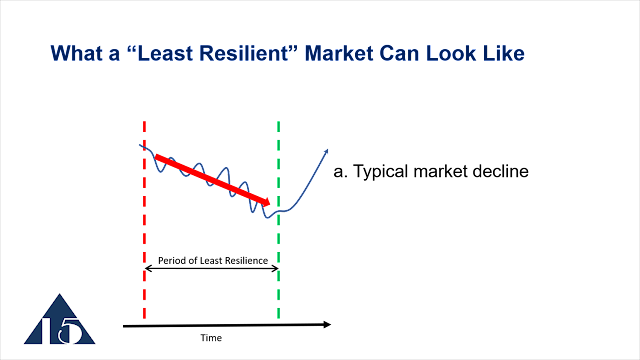 The second pattern (b) is when there is an abundance of good news in the market place and stock prices remain at roughly the same level over the 4 to 12 weeks. Prices move higher temporarily on any good news but the market does not hold on to those gains. 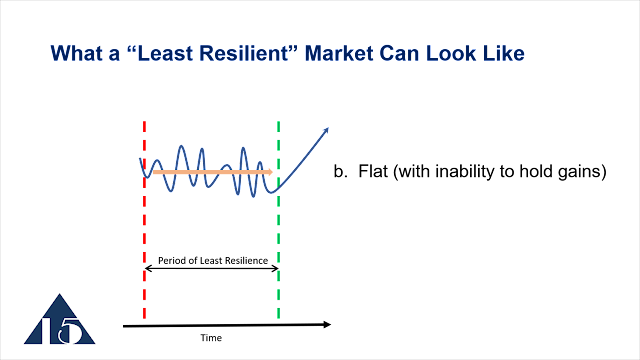 In this pattern, staying in the market or moving out does not have a big impact on returns over the period.

The third pattern is a delayed decline (c). Rather than a consistent decline over the period, the major decline occurs at the end of the period. 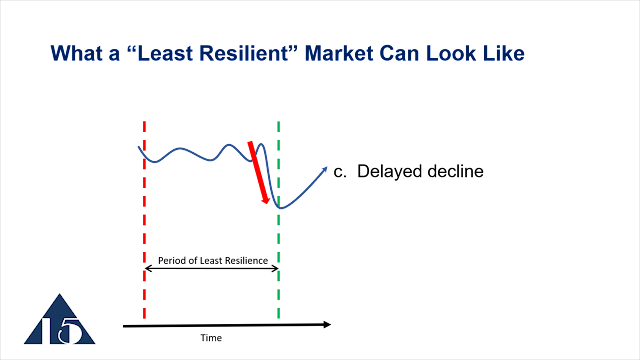 A good strategy for pattern c is to be out of the market prior to the decline. The peak of the Micro MRI at the beginning of the period is the clearest and most objective signal to get out of the market. While doing so at that time seems premature, it is the most effective strategy for this pattern. One should be patient with the defensive position while the market moves up and down without a large gain or loss prior to the larger decline at the end of the period. 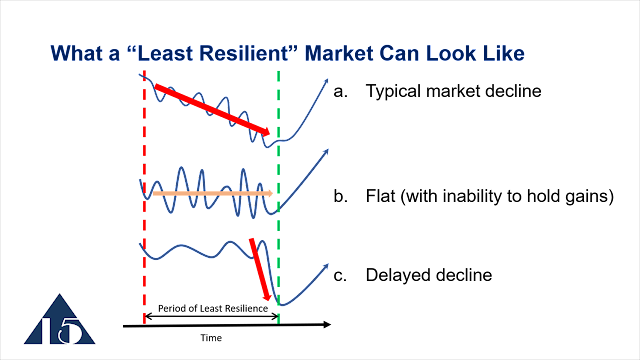 Historically, patterns a and c are most common and create large losses. Pattern b is less common. The Focused 15 Investing strategy is to get out of the market on vulnerability. If pattern b prevails, we might miss some of the positive returns but in doing so we avoid the risk that what initially looks like a b pattern is actually a c pattern. Since the losses in a and c can be very large, getting out of the stock market is the more prudent course of action.

In the current situation, we are clearly at a very high level in the Micro MRI and will soon begin a period of least resilience (none of the MRI in an upleg) and we are moving out of the stock market. Raising cash over the last few weeks has been a preemptive action to avoid the abrupt declines typical of pattern a.

There is good news in the marketplace that will be influencing returns. The Fed and its counterparts around the world have pledged to do whatever it takes to heal the economy and protect investors, countries are reopening, and potential game-changing cures and vaccines make the news. As for bad news, record unemployment, an emerging wave of bankruptcies, and prolonged social distancing all create a drag on the economy and stock prices.

Since we don’t try to determine the impacts of the current news and we move out of the stock market on vulnerability, we are preparing for patterns a and c. We will see after the fact if either of these patterns were relevant. If it turns out that pattern b is most relevant, we may have taken these steps simply as a precaution.