The Focused 15 Investing model portfolios are responsive to the current resilience ratings as opposed to the expectations described above. However, the current state of the markets and their likely progression from here is worth noting. US industrial stocks have had a Market Resilience Index Rating of 3 for some time. While there may be greater fluctuation in the ratings (and prices) over the next few weeks, the interesting characteristic of this market is that it has been through a bear market pattern in terms of resilience changes but has avoided the abrupt price declines and ultimate sense of capitulation typical of bear markets. For stocks globally, most of the declines have happened in Europe and Asia.

The bear market pattern began in late 2014/early 2015. The peak of resilience occurred in March/April of 2015. The trough, at least thus far, occurred in early July 2016. The implication for US stocks is that prices may move higher from here, despite recently making new highs. I do expect some price weakness over the next few weeks. If we do not have major price declines over the next several weeks, it will indicate the beginning of a longer period of rising prices.

The Micro Market Resilience Index for US stocks is close to peaking for many assets. When it does start to decline, prices may soften. At the moment, it appears that the associated price declines will be minimal because of the presence of the Exceptional Macro MRI. The Focused 15 Investing model portfolios will likely have high equity allocations for the next few weeks.

Should the Exceptional Macro MRI also turn negative, we may see greater price declines. This is what we should be watching for over the next few weeks.

When the Micro MRI starts to move higher several weeks from now, we may see the kind of price pop we usually associate with the beginning of a new bull market.

A few months ago, I compared the current market condition to 2002. In recent weeks, the complexion of the market has shifted and now appears to be developing much more resilience than it did in 2002. Thus, that comparison is not as strong as it once was. 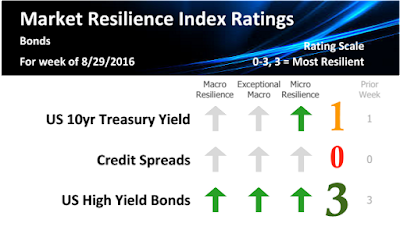 With a rating of 1 on the resilience scale, the US 10y Treasury yield is somewhat vulnerable to declines. I expect this condition to remain in place for the next few weeks. US 10y Treasury bond prices (not shown in the graph above) display strong resilience. Near term, resilience is abating, and prices may ease slightly. That said, the market does not appear especially vulnerable now, suggesting any decline in 10y bond prices will be moderate.

Bottom line: US bonds, in general, and high-yield issues, in particular, will remain attractive investments over the next few weeks. 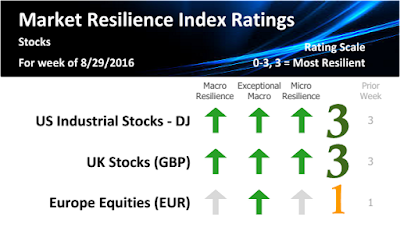 With a rating of 3, US Industrial stocks, as represented by the Dow Jones Industrial Average, will continue to display high resilience. Stock prices will tolerate negative news and events reasonably well in the near term. Over the last few weeks, the price declines are attributable more to a reversal of the recent strong gains than to an absence of resilience.

UK stocks are rated 3 and have been resilient for the last several weeks. Qualitatively, they are getting a boost from the weakening UK currency. I do expect resilience to fade over the next few weeks, with UK stocks becoming more vulnerable to price declines.

European stock prices have a rating of 1. While more vulnerable than the DJ Industrial stocks, they have been finding more resilience over the last few weeks.

Japanese stocks (not shown in graphic) also have a 0 rating, down from 1 the prior week. We should expect softness in Japanese stock prices. 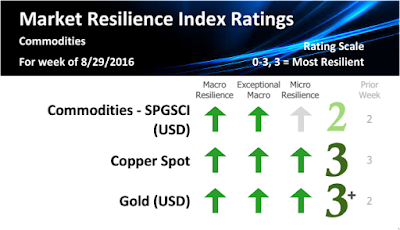 The S&P Goldman Sachs Commodity Index represents a basket of commodities, with a high weighting in crude oil. The S&P GSCI has a rating of 2. Crude oil (not shown in graphic) has a new rating of 3 this week, up from 2, indicating that oil prices are resilient.

Gold is resilient and with a new rating of 3 this week. 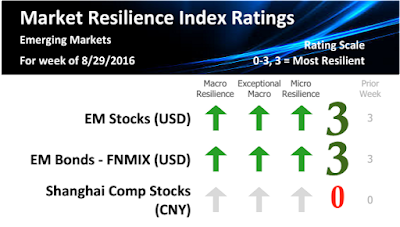 Emerging market stock and bond prices continue to be resilient. EM stocks and bonds, represented by the MSCI Emerging Markets Index and a popular EM bond mutual fund, respectively, have ratings of 3.

I expect that the rating for EM stocks will decline over the next few weeks.

Chinese stocks, as represented by the Shanghai Composite, have a rating of 0, which was a new rating last week. Prices will be vulnerable to declines. 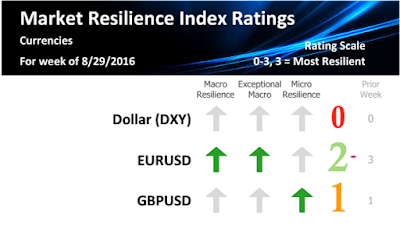 The Dollar index DXY is rated 0 and is vulnerable to declines.

The Euro is rated 2, down from 3 the prior week. This shift was expected.

GBP is rated 1, which means it is somewhat vulnerable to declines. It is not as vulnerable as it was a few weeks ago.
Posted by Jeffrey at 7:59 PM