Beginning, Middle, or End of Rally?

The most recent rally began (using our methodology) on November 7, one day before the election. Our report was published November 1, at a time when many thought that Clinton would surely win the Electoral College tally. I believe we would be having a rally now if Clinton had won. The Focused 15 Investing approach emphasizes anticipating the direction and timing of market moves based on market resilience. We do not try to anticipate magnitude, except to suggest that moves will be either small (and maybe not worth trying to catch) or large. The magnitude of this rally has been large, but we don’t know what it would have been if the election had a different outcome.

We are just over one month into this rally, and the question is: Are we closer to its beginning, its middle, or its end?

Let’s first look at the magnitude of the returns. The chart below shows the price moves of the DJIA since 2000. The recent pop in prices is seen at the far right. It looks large compared to what has happened since 2000, but not completely unprecedented. There was a roughly 10% increase in prices from November 4th through December 9th. 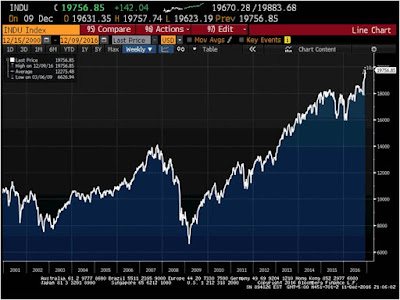 Yes, prices have increased dramatically over the last month, and they are at an all-time high, but those reasons alone are not sufficient cause to take money out of the stock market. The chart below is also for the DJIA and covers the same time period. However, it is on a log scale, which means that a move up or down of a given length (visually on the chart) equals the same percentage point shift regardless of the starting point of the move. This has the effect of reducing the apparent size of the recent run up compared to prior price movements. The recent shift is dramatic, but not unusual in percentage point terms.

As prices move higher, greater price moves are needed to achieve the same percentage point move. This is why Focused 15 Investing publications favor using a log scale over multi-year periods.

Thus, the recent price movement is not unusual in percentage terms. Prices being at an all time high should also be ruled out as a reason to get out of the market. Economic growth continues (even if the rate is slow) and inflation boosts price levels over time. These forces have been present for decades and continue to push market price levels higher.

At the moment, the US stock market is resilient and likely to remain so for the foreseeable future. It is rated 2 out of a possible 3. This means that two of the three Market Resilience Indexes (MRI) are positive. While the next 4 to 5 weeks may not be like the last (returning about 10% on the DJIA), resilience is sufficient to limit the likelihood of a deep and/or protracted decline over the next several weeks. 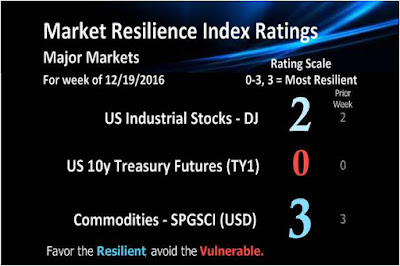 After the first of the year, we may see larger declines that could alarm some market observers. It appears, however, that any decline will be short-lived given the strength of current resilience. The Focused 15 Investing model portfolios may become more defensive just prior to that time, but for now, the model portfolios are fully invested. Our assessment for January will take place at the end of December.

As my regular readers know, we invest on the basis of market resilience – not forecasting future events. When negative events happen in a resilient market, losses may occur, but they tend to be recovered quickly. Negative events happening in a vulnerable market tend to result in longer-lasting declines, which may induce panic selling leading to greater losses. For now, the US stock market appears to be resilient and able to recover from negative news and events. Stay invested for now.

The US 10y Bond continues to be vulnerable to declines. Going forward (over the next roughly 6 weeks), declines are likely to be less severe than the recent drop. However, this is now an inherently vulnerable market and should be avoided. Focused 15 Investing model portfolios have little or no exposure to US 10y bonds. The US 30y is also vulnerable overall but is now developing some resilience, at least over the short term.

Recent market action reinforces my view that in March 2016 we bounced off the trough of a phantom bear market that took place largely in 2015. It was clear that resilience levels experienced a bear market. However, probably because of monetary policies, US stock prices did not.

The bounce after the phantom market trough was anemic. During this period, we had rally-like MRI levels but not rally-like price behavior. I described those months in a commentary as a mid-2016 malaise.

The dramatic returns over the last month may simply be the market catching up to roughly where it might have been based on its own inherent resilience, regardless of whether Trump or Clinton won.

Somewhere Between the Beginning and Middle

It could be that we are in a bull market that is almost a year old. Based on 100 years of market history, we can see that bull markets don’t live indefinitely, but they can last several years. If we indeed experienced a phantom bear market, we are now in the early years of a new bull market. Given the phantom bear market and the mid-2016 malaise, this bull market could be shorter than usual. We will only know for sure after the fact, and as long as the current MRI ratings register “resilient,” we would invest that way.

Of course, who the president is and what they accomplish does have an impact on economic growth and stock market performance. Also, markets anticipate possible events well into the future. Perhaps the pro-business policies of a Trump administration will boost corporate earnings.

Nevertheless, it is important to be dispassionate about politics. If resilience levels change, we will change portfolio exposures regardless of views we might hold about current political circumstances.

For more information about Focused 15 Investing and the performance of the approach, please see the website Home Page tab above.
Posted by Jeffrey at 7:31 PM