Today's Drop and Uncertainty in Washington


The news today seemed to drive the market.  Concerns about the Trump presidency and his agenda being derailed were common topics in the press.  The Focused 15 Investing approach is based on systematic assessments of the market’s resilience, not on forecasts of a particular outcome of current events.  That said, in the past, I have indicated when I believe the market will recover quickly from bad news or simply move higher.  Three recent prominent events are interesting because they occurred at the naturally occurring low points of the Micro Market Resilience Index (MRI).  They are the Brexit referendum in June 2016, the US presidential election in November 2016, and today’s recent sell-off being associated in the press with the Trump/Comey events.


The following chart shows the DJIA, the Macro and Micro MRI, and the timing of these events.  One can see that these events correspond to low points in the Micro MRI.  The current level is at about the 12th percentile of the weekly levels since 1918.  Eighty-eight percent of the weeks since that time have had higher levels. 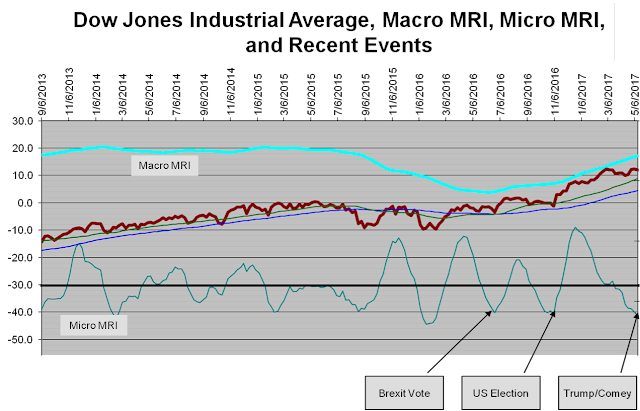 This chart is interesting because it shows how the slope of the Macro determines how prices will move on the down-leg of the Micro MRI cycle.  When the Macro slope is clearly negative, as it was in September 2015 and February 2016, the price declines were pronounced.  When the Micro had similar down legs and the slope of the Macro was positive, the price declines were less dramatic as seen in May 2016, September 2016, and January 2017.

This pattern is what we expect from the market when viewed through the MRI lens.  Thus, I expect the market to recover from the recent events, consistent with the positive sloping Macro MRI and the higher Micro MRI levels.

The chart also shows that the Macro MRI is at a relatively high level.  The top of this cycle may be moving into a mid-term time frame, perhaps later this year.
Posted by Jeffrey at 11:01 PM