In the second quarter of 2020, company earnings declined dramatically because of the pandemic, but stock prices increased because Micro MRI shifted to the upleg of its normal cycle and government and Federal Reserve actions began to compensate for the decrease in economic activity and created optimism about an economic recovery.  These changes – a decrease in earnings and an increase in stock price – resulted in high price-to-earnings ratios.  Changes in the price-to-earnings ratio can be temporary because of short-term changes in earnings, such as those occurring in 2020.

The price-to-book ratio is less sensitive short-term changes in earnings and produces a more stable valuation ratio.  However, in the current environment both valuation ratios are high compared to the last 20 years, suggesting that stocks are expensive.

The following figure has three panels that plot DJIA data from Bloomberg. The top panel shows the price history for the DJIA (total return on a log scale), and the time period covered is 1997 through early November 2020.  Over the last 20 years, there were two major declines prior to 2020: 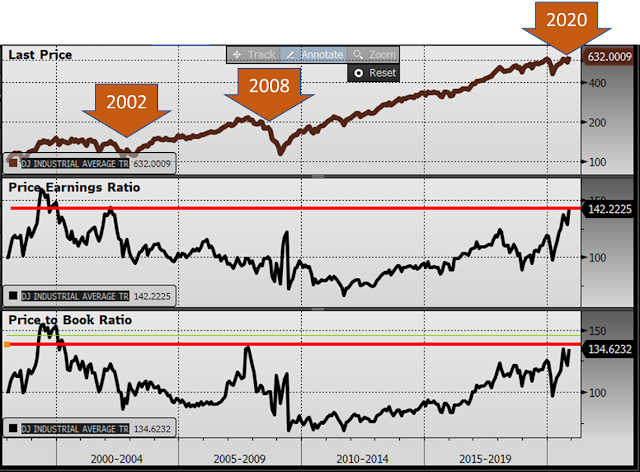 The second and third panels show the valuation ratios for price-to-earnings and price-to-book ratios, respectively. The horizontal red lines show the current levels of those ratios. Prior to the price trough of October 2002, the price-to-earnings ratio was at a high level – a level similar to today’s.  This data point suggests being skeptical now of further price increases.

Prior to the decline of 2007/8, the price-to-book ratio was at a high level – a level similar to today’s. This data point also suggests being skeptical now of further price increases.

However, note that at the far left of both valuation charts, in the late 1990s, levels are higher than the current levels (indicated by the red lines). This was the end of the Internet Boom. Even though the Internet Boom primarily affected the NASDAQ index, the valuation measures of the DJIA also showed high valuation statistics as well. This early period may be a useful comparison for the current period. The shutdown measures to contain the virus have boosted the prices and valuations of stocks that are heavily weighted in the NASDAQ index, including Amazon, Microsoft, Apple, Facebook, and Google.

While these direct historical comparisons suggest that stocks are already expensive, there are factors that may make these long-term historical valuation comparisons less relevant to the current situation.   They are:

Also, many believe that stock prices should reflect the present value of future company earnings.  The low interest rate today means that earnings further into the future are more relevant to the calculation of present value of future earnings.  A similar effect is seen in a lower mortgage interest rate allowing someone to buy a more expensive house than they could afford at higher interest rate.  Thus, the current extremely low interest rates now may tolerate higher valuation measures without being considered too expensive to purchase.  I mention an article int eh “Alternative Narratives” section below about Jim Paulsen’s view that stocks are very cheap at this point.  He arrives at that conclusion by considering today’s currently low interest rates, among other factors.

The US Federal Reserve has pledge to keep interest rates very low for a long period of time, and also to buy assets on the open markets to reduce fears about market price declines.  The extent of the current pledge has been extreme:  In early June of 2020, Fed Chairman Jerome Powell said, “We’re not thinking about raising rates, we’re not even thinking about thinking about raising rates," conveying that interest rates are unlikely to increase before 2022, and even then, most in the Fed believe rates to remain low even into 2022 (based on the current plotting of forecasts by Fed members).  https://www.wsj.com/articles/newsletter-were-not-thinking-about-raising-rates-01591872020

Governments around the world have spent billions to compensate for reduced employment and business activity.  Less spending because of the economic shutdown plus the stimulus could conceivably produce pent-up demand.  As soon as the risk of Covid-19 reduces because of an effective treatment and/or vaccine, spending may be unusually high as people make purchases that have been delayed during the pandemic. The potential for high future demand is suggested by the personal savings rate in the US, which has moved sharply higher during the pandemic: https://www.statista.com/statistics/246268/personal-savings-rate-in-the-united-states-by-month/. While the saving rate has come down from its April 2020 high, it is still high compared to recent years.

Thus, the current valuation statistics of the DJIA may not be excessive considering future growth related to the level government stimulus and low interest rates.