With the stock market at all-time high price levels, it is a good time to review a common valuation measure to get perspective on the recent past and how the DJIA may move higher from this level. This note covers the average Price-to-Earnings (PE) ratio of the DJIA currently and compared to the 20+ years since the Dotcom boom of the late 1990s.

While still at historically high levels, the PE ratio of the DJIA has declined recently as company earnings have increased. This shift has made the stock market less expensive by this measure and may support the higher market resilience that the MRI are implying for the upcoming several weeks.

All else equal, one wants to buy assets at low prices and sell them at high prices. Consistent with this idea, one wants to buy stocks when the PE ratio is low and sell when it is high. A low PE ratio means that stocks are relatively inexpensive and you are paying less for the company’s earnings, all else equal. A high PE ratio means that stocks are expensive and you are paying more for the company’s earnings.

The diagram below shows the price level of the DJIA (black, on the right log scale) and the PE ratio (yellow, on the left scale, which is calculated by Bloomberg) for the period 8/29/2012 to 7/28/2021. One can see at the far right of the chart that the PE ratio has actually moved down recently as the price of the DJIA has moved higher. The current PE level is 22.19, which is lower than its peak of 26.9 at the end of March 2021 (red arrow). By this measure, the DJIA is getting less expensive and more attractive to buy because corporate earnings are growing more quickly compared to the price of the DJIA. 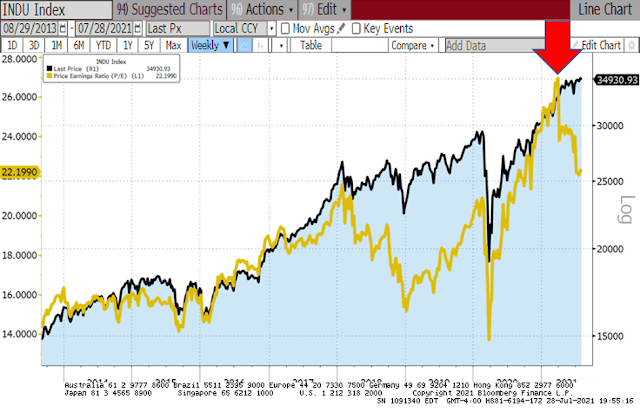 The recent peak of the PE ratio was very high compared to the last 20+ years. The last time the market had a PE valuation as high as it was in March 2021 was back in the late 1990s, on 8/20/1999. That date is shown in the figure below (yellow arrow) and was at the height of the Dotcom boom, just before the Dotcom bust of the early 2000s. Since the end of 1999, all PE readings for the DJIA have been lower – even through the peak of the DJIA just before the Global Financial Crisis of 2007 to 2009. The figure below shows the PE ratios and DJIA prices beginning in 1997. 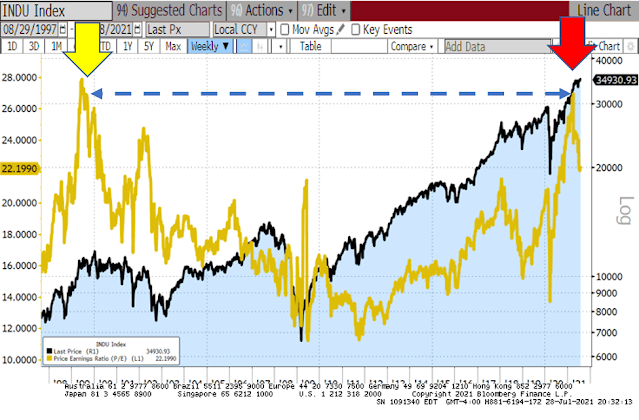 Thus, compared to the PE ratio levels since 1999, the March 2021 reading was high. The recent reading of 22.19 is also high compared to the time period shown (Bloomberg does not have comparable PE ratios for earlier periods). That said, the decline of PE ratios since March (due to earnings growth) may help convince investors that current or even higher prices can be sustained.

Other factors influence PE ratios, including expected earnings growth and interest rates. We are experiencing very low interest rates now and there is also a high level of economic stimulus, both of which may accelerate the growth of corporate earnings. These factors are justifying higher valuation ratios for many investors. Although not shown in the figures, investment professionals tracked by Bloomberg expect high earnings growth to continue for companies in the DJIA, potentially leading to even cheaper valuation levels and or higher prices.

The PE ratio and other valuation measures do not directly affect our investment models or algorithms. Instead, investors globally consider PE, many other valuation measures, and expectations for future growth and interest rates in their decisions to buy or sell stocks. The price movements resulting from their decisions in turn affects our resilience measures. An expectation of an increase in interest rates or deceleration of corporate earnings growth would cause investors to be less tolerant of high valuations. Many investors globally are keenly focused on these issues and should they shift to a more pessimistic stance, we should see a shift in the market resilience measures. Based on historical norms for the cycles of resilience, I expect the market to be resilient for several weeks. A period of lower resilience is more likely to occur in the fall (late September).
end
Posted by Jeffrey at 11:10 PM