The MRI suggest the end of the current stock price decline is several weeks away.

This post describes the current level of the DJIA from two perspectives. First, I compare this decline to other major price declines over the last 100+ years. If these past declines are a relevant guide, the depth of the current decline is as severe as the others considered.

Second, the DJIA’s current valuation measures (Price/Book and Price/Sales) compared to the period from 1993 to the present suggests that prices need to fall further to approach low valuation levels that have been attractive historically. From this perspective as well, the current decline appears to be several weeks away from the end.

For the last 20+ years, the Fed has stepped in to support economic growth by lowering interest rates when the stock market weakens and the economy begins to falter. However, the Fed is far less likely to lower interest rates in this situation because doing so would, at this time, encourage inflation and fighting inflation is currently the Fed’s primary objective. The MRI don’t tell us if the economy will slip into recession. They indicate market resilience and vulnerability. At this time, the stock market looks very vulnerable to declines.

As of last Friday, we are at week 24 since prices peaked in early January of this year. Compared to major declines over the last 100+ years, the current decline is more severe than prior declines, many of which went on to experience even deeper declines before moving higher.

Earlier this year, I wrote that 2022 may be similar to the DJIA decline that began in 2000. The collapse of the Dotcom bubble beginning in 2000 most directly affected the NASDAQ stock index, which is biased toward tech stocks. But the collapse also affected the DJIA. The DJIA made a long slow decline from 2000 to 2002 and then dropped again in 2003. During that period the Onyx sleeve consisting of the ETFs XLP (consumer staples stocks), XLU (utilities stocks), and UST (7-10-year Treasury Bonds), and SHY (1-3-year Treasury bonds) performed well.

However, over the last few months, we have seen stronger-than-expected declines in the Onyx sleeve ETFs. Thus, the decline that began in 2000 is not a useful guide for this decline. The broad nature of this decline suggests it could continue for several weeks more.

Figure One below shows price performance of the DJIA for several declines since 1929, including those beginning after prices peaked on:

The horizontal axis is the number of weeks after the DJIA peaked. The line descends to the lowest point in that decline and is then horizonal from that point until it reaches the scale on the right. All lines start with the value of 1.0. A decline ending at 0.60 on the scale, for example, means a 40% loss of the starting value. The thick green line is the current decline. 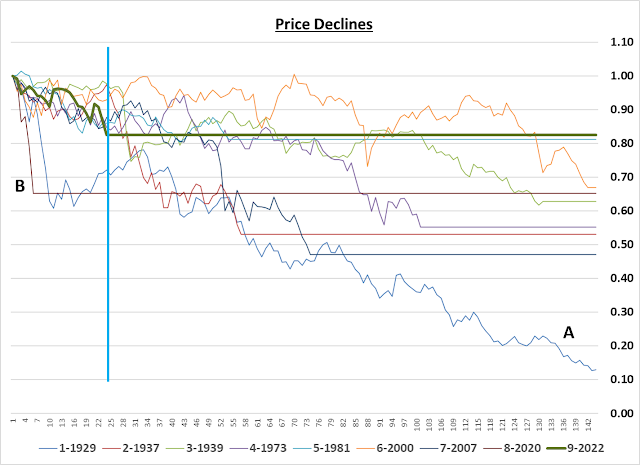 Figure One presents a reasonable comparison for the current decline (shown with the thick green line) showing the depth and duration of major declines since early 1929. Against this backdrop, the current decline has a relatively short duration, which is consistent with the MRI conditions indicating that the bottom of the market is several weeks away. When the bottom of the market does arrive, the DJIA will likely be at a lower level than it is now.

Excluding the decline starting in 1929, all other declines ended at values between roughly 0.45 and 0.80, representing losses of about 20% to 55%. The current decline for the DJIA, shown by the heavy green line, is just approaching that range with a roughly 17% decline so far.

For clarity, Figure Two below is the same as Figure One but without the declines beginning in 1929 and 2020. The depth and duration of the 1929 decline should be kept in the back of our minds but we are not likely to have a decline of its scale in the near-term. Policy makers made several mistakes during the 1929 decline, which I referenced in an earlier note.

The 2020 decline is not applicable to the current decline because it was ended by extraordinary stimulus around the world. Stimulus of that scale seems less likely to occur for this decline because there is recognition that the stimulus implemented to address the 2020 decline may have magnified the inflation challenge we now face, and the Fed has indicated that it will aggressively fight inflation by increasing rates and reducing other measures supportive of the markets. See endnote #1. 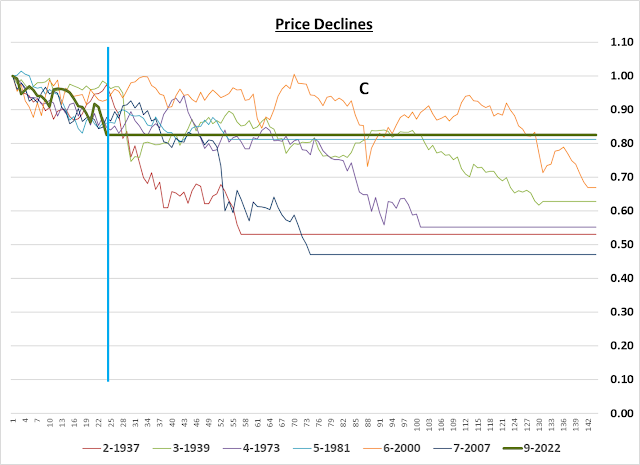 The heavy green line in Figure Two (and Figure One) represents the current decline, after prices peaked 1/7/2022. As of last Friday (6/17/2022), we were at week 24 and the DJIA is at 0.83 of its beginning level, which means a 17% loss.  The other declines shown in Figure Two had an average loss of 9% by week 24.  Thus, the current decline is comparatively steep.

The orange line by “C” is shows the path of the decline that began in 2000, after the Dotcom bubble. Especially over the last few weeks, the market has experienced sharper losses than the 2000 decline. It is no longer reasonable to compare the current decline to the 2000 decline.

Of the declines shown, the average total decline was 39%, and this may be a reference point to consider for the magnitude of decline that may transpire for the current decline. This is not a forecast, but simply an observation to help frame expectations.

Valuations Suggest that Prices are Not Yet Low

Figure Three below shows the price of the DJIA (brown, log scale, right) since 1993, along with the Price/Book (purple) and Price/Sales (blue) ratios. Valuation data for earlier dates is not available through my data sources. The current readings are at the far right of the figure. 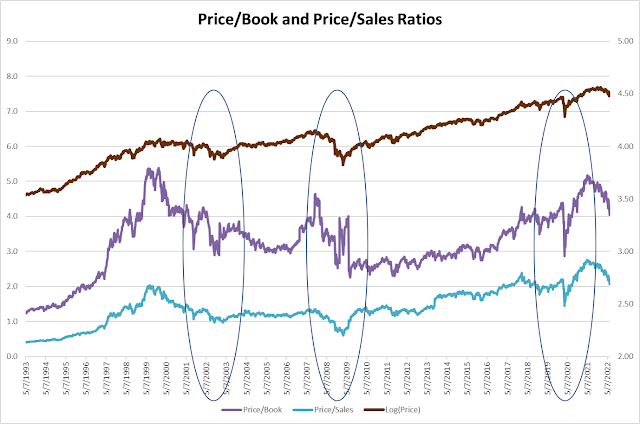 The ellipses show the levels of these ratios at the bottom of the major declines of the period from 1993 to the present. In all cases, the current ratios are higher than the levels at the ends of prior declines, suggesting that the current ratios may need to decline further to attract investors. The current level of the Price/Book ratio (purple, left scale) is 4.0. This means that the current price of all companies in the DJIA is four times the sales of all those companies. The average Price/Book value for this entire period is 3.3. The value of this ratio at the bottoms of the prior declines indicated is 3.0 or lower. Thus, the current value is still high by these historical standards.

The Price/Sales ratio (blue, also on left scale) is currently 2.1, meaning that the price of the DJIA companies is just over twice the sales of those companies. The average Price/Sales value for this entire period is 1.4. For the end of the 2000 decline in 2022, the Price/Sales ratio was about 1.0.  In 2009, it was 0.6. In 2020, the lowest value was 1.4. Thus, the current value is still high by these historical standards.

These forces can cause investors to care much more about the near-term prospects of a company.  Companies with weak near-term earnings but promises of high future growth can be shunned by investors because the rosy future may not materialize as expected. Therefore, indexes that are heavily weighted to companies promising high future growth, like the NASDAQ stock index, can become relatively more vulnerable to price declines. We are seeing this in the performance numbers reported below – the NASDAQ has had greater losses this year than the DJIA.

While the above material describes the context of the current market, our portfolios are influenced more by the MRI. The MRI indicate that the stock market will continue to be vulnerable to declines for several more weeks.

The US stock market has declined from December 31, 2021 through last Friday. I have calculated the returns that one would get by following instructions since the beginning of the year for the “main” portfolios for each of the publications. Please see endnote #2 for a brief comment on the main portfolios. Contact me with questions.

1 - Well before COVID, we had an extended period of exceptionally low interest rates.  During that period, policy makers around the world tried to get inflation to move higher. The Fed wanted to get inflation up to 2% and was struggling to induce inflation by keeping interest rates exceptionally low. During this period, the prices of many assets went higher. Stocks, bonds, real estate, cryptocurrencies, etc. rose in price. Then COVID came along, and the government added even more stimulus to keep the economy from falling further than it otherwise would.

Inflation has gone higher – much higher - than policy makers expected.  In response, the government support is being retracted.  Most notably, the Fed is pushing interest rates higher. As rates go higher, all the assets that seemed reasonably priced two years ago are seeming more expensive. Stocks, bonds, real estate, cryptocurrencies, etc. are now moving lower.

The MRI started to indicate greater market vulnerability in the middle of 2021. From this perspective, a good portion of what we are experiencing was already in motion at that time. The war in Ukraine and the resulting boost in energy prices has added to inflationary pressures but does not appear to be the sole cause of the inflation we are experiencing. The MRI indicate that forces over many years contribute to the current conditions. From this perspective, addressing the weaknesses in the stock market and probably the economy will be a long-term effort. This further supports the view emanating from the MRI that we have several weeks to go before the decline ends.

If you use either of these as your long-term portfolio and have followed the instructions since the first of the year by switching to the target weights of a less aggressive portfolio (by following the specification for Box #3, i.e., “-1”) and holding Box #2 Cash as instructed, your account’s performance should be close to the figure above.

Some deviation between your account and the numbers above can be expected. The performance figures above assume trading is done at the close of trading on Fridays.  Most people trade earlier in the day. In addition, we sometimes trade before Friday. If you use as your long-term portfolio one that is more or less aggressive than the main portfolio, your actual performance will be different.