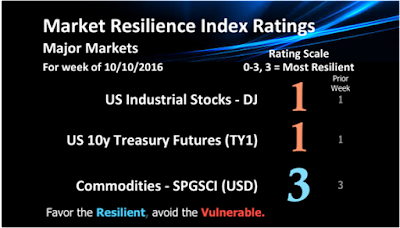 Both the US stock and bond markets have been through a period of slightly heightened vulnerability over the last several weeks. Over the next few weeks, I expect both markets to be able to support higher prices, with bonds likely to move higher sooner.

This note is a follow-up to the post for the week of 9/19/2016. The table below shows the Market Resilience Index Ratings for both US 10y bonds and US stocks and adds the three most recent weeks. The ratings have indicated low resilience (meaning moderate vulnerability). Compared to earlier periods, the recent price movements have not been great, but there is some indication that prices have been affected by the vulnerability. The first table and chart focus on US 10y bond (I analyze the bond futures TY1 in this case).

* Likely to move to a rating of 2 over next few weeks.

The screen shot below shows the price to TY1 and two vertical lines. The first line (white) shows when the rating shifted to 2 from 3, effective 7/14/2016. This indicates that high resilience had peaked. One can see that the prices peaked just before that date. The second vertical line (red) shows when the rating shifted to 1 from 2, effective 9/2/2016. One can see that prices softened after that time. The minimum rating is 0, so the was still some resilience for bond prices. An important point is that from this point forward, it appears that the rating will increase. Bond prices are likely to stabilize over the next few weeks and could even move higher. 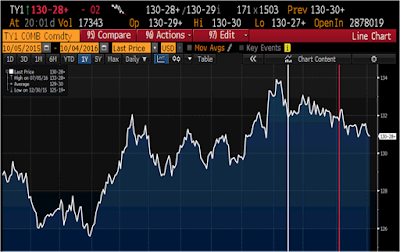 US stocks, as measured by the Dow Jones Industrial Average, currently have a rating of 1 and may soon move to a rating of 2.

* Likely to move to a rating of 2 over next few weeks. 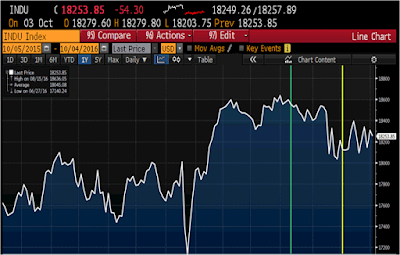 A key point is that prices have not declined meaningfully during this period of increased vulnerability, and there are signs (finer signals than described here) that the period of vulnerability will dissipate over the next few weeks.

Going forward, I do expect an upgrading of the resilience of the DJIA. While it has not happened yet,  I expect it to take place within a few weeks. Between now and that shift, we may have some price dips that represent global stresses, but the duration of the dips is likely to be short given that we see some modest level of resilience in a number of equity markets globally.

In total, these observations suggest that, barring major negative news or events, US stock prices can reach new highs over the next month or so.

Commodities have the highest resilience of the major asset classes right now. 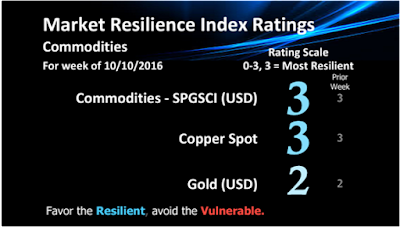 The S&P Goldman Sachs Commodity Index represents a basket of commodities, with a high weighting in crude oil. Crude oil (not shown in graphic) continues to have a rating of 3. Please note that crude is a volatile asset and can differ meaningfully week to week from the MRI ratings. Over long periods of time, however, the ratings result in profitable trades.

Gold has a rating of 2, moderately resilient. There may be near-term price softness, but the Macro and Exceptional Macro MRI continue to be positive, and prices are likely to be resilient mid-to-longer term.

While much of the world is seeing growing resilience, the situation for Japan-based investors is different. The USDJPY spot rate is vulnerable to lower values, which means a stronger yen. This puts downward pressure on the returns from non-yen investments, such as sovereign bonds excluding Japan (WGBIxJ) and on the earnings of Japan’s export sensitive stocks (TPX). Both of these have new ratings of 0 this week. 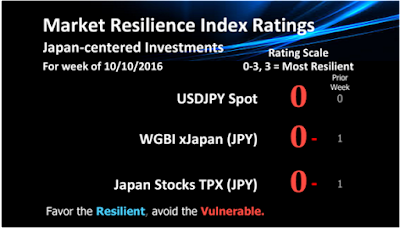 The yen is likely to see additional strength. Historically, a strengthening yen has been an indicator of global economic and financial stress. Higher bond prices in the US are also an indicator of stress. These are warning signs and would challenge the resilience we are seeing in the seven stock market indexes mentioned above.

The DJIA's current rating of 1 (moderate vulnerability) is consistent with the signs of stress found in the strengthening yen and potentially higher bond prices. On balance, however, given the signs of resilience most major equity markets, I believe the stock markets will avoid major declines like those we saw in the summer of 2015 and early 2016, even if the upcoming US election and other political issues may test what resilience is found in these stock markets.
Posted by Jeffrey at 7:01 PM